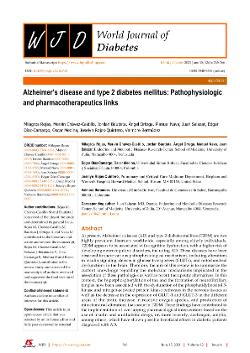 At present, Alzheimer’s disease (AD) and type 2 diabetes mellitus (T2DM) are two highly prevalent disorders worldwide, especially among elderly individuals. T2DM appears to be associated with cognitive dysfunction, with a higher risk of developing neurocognitive disorders, including AD. These diseases have been observed to share various pathophysiological mechanisms, including alterations in insulin signaling, defects in glucose transporters (GLUTs), and mitochondrial dysfunctions in the brain. Therefore, the aim of this review is to summarize the current knowledge regarding the molecular mechanisms implicated in the association of these pathologies as well as recent therapeutic alternatives. In this context, the hyperphosphorylation of tau and the formation of neurofibrillary tangles have been associated with the dysfunction of the phosphatidylinositol 3-kinase and mitogen-activated protein kinase pathways in the nervous tissues as well as the decrease in the expression of GLUT-1 and GLUT-3 in the different areas of the brain, increase in reactive oxygen species, and production of mitochondrial alterations that occur in T2DM. These findings have contributed to the implementation of overlapping pharmacological interventions based on the use of insulin and antidiabetic drugs, or, more recently, azeliragon, amylin, among others, which have shown possible beneficial effects in diabetic patients diagnosed with AD.
Enlace para referencia:
https://hdl.handle.net/20.500.12442/8410
Enlace DOI:
http://dx.doi.org/10.4239/wjd.v12.i6.745
Enlace URL externo:
https://www.wjgnet.com/1948-9358/full/v12/i6/745.htm
Compartir:
Impacto
﻿
Colecciones