Metabolic Syndrome: Is It Time to Add the Central Nervous System? 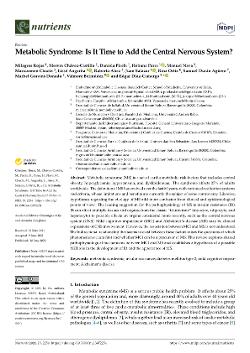 Metabolic syndrome (MS) is a set of cardio-metabolic risk factors that includes central obesity, hyperglycemia, hypertension, and dyslipidemias. The syndrome affects 25% of adults worldwide. The definition of MS has evolved over the last 80 years, with various classification systems and criteria, whose limitations and benefits are currently the subject of some controversy. Likewise, hypotheses regarding the etiology of MS add more confusion from clinical and epidemiological points of view. The leading suggestion for the pathophysiology of MS is insulin resistance (IR). IR can affect multiple tissues and organs, from the classic “triumvirate” (myocyte, adipocyte, and hepatocyte) to possible effects on organs considered more recently, such as the central nervous system (CNS). Mild cognitive impairment (MCI) and Alzheimer’s disease (AD) may be clinical expressions of CNS involvement. However, the association between MCI and MS is not understood. The bidirectional relationship that seems to exist between these factors raises the questions of which phenomenon occurs first and whether MCI can be a precursor of MS. This review explores shared pathophysiological mechanisms between MCI and MS and establishes a hypothesis of a possible MCI role in the development of IR and the appearance of MS.
Enlace para referencia:
https://hdl.handle.net/20.500.12442/8318
Enlace DOI:
https://doi.org/10.3390/nu13072254
Compartir:
Impacto
﻿
Colecciones