The effect of comorbidities on glycemic control among Colombian adults with diabetes mellitus: a longitudinal approach with real-world data 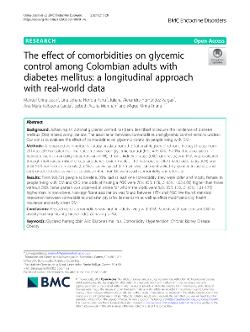 Background: Achieving an optimal glycemic control has been described to reduce the incidence of diabetes mellitus (DM) related complications. The association between comorbidities and glycemic control remains unclear. Our aim is to evaluate the effect of comorbidities on glycemic control in people living with DM. Methods: A retrospective longitudinal study on data from the National Registry of Chronic Kidney Disease from 2014 to 2019 in Colombia. The outcome was poor glycemic control (PGC = HbA1c ≥7.0%). The association between each comorbidity (hypertension (HTN), chronic kidney disease (CKD) or obesity) and PGC was evaluated through multivariate mixed effects logistic regression models. The measures of effect were odds ratios (OR) and their 95% confidence intervals (CI). We also evaluated the main associations stratified by gender, insurance, and early onset diabetes as well as statistical interaction between each comorbidity and ethnicity. Results: From 969,531 people at baseline, 85% had at least one comorbidity; they were older and mostly female. In people living with DM and CKD, the odds of having a PGC were 78% (OR: 1.78, CI 95%: 1.55-2.05) higher than those without CKD. Same pattern was observed in obese for whom the odds were 52% (OR: 1.52, CI 95%: 1.31-1.75) higher than in non-obese. Non-significant association was found between HTN and PGC. We found statistical interaction between comorbidities and ethnicity (afro descendant) as well as effect modification by health insurance and early onset DM. Conclusions: Prevalence of comorbidities was high in adults living with DM. Patients with concomitant CKD or obesity had significantly higher odds of having a PGC.
Enlace para referencia:
https://hdl.handle.net/20.500.12442/7933
Enlace DOI:
https://doi.org/10.1186/s12902-021-00791-w
Enlace URL externo:
https://bmcendocrdisord.biomedcentral.com/articles/10.1186/s12902-021-00791-w
Compartir:
Impacto
﻿
Colecciones